AMD Skyesports Championship 4.0 makes a comeback as an on-ground event in Mumbai 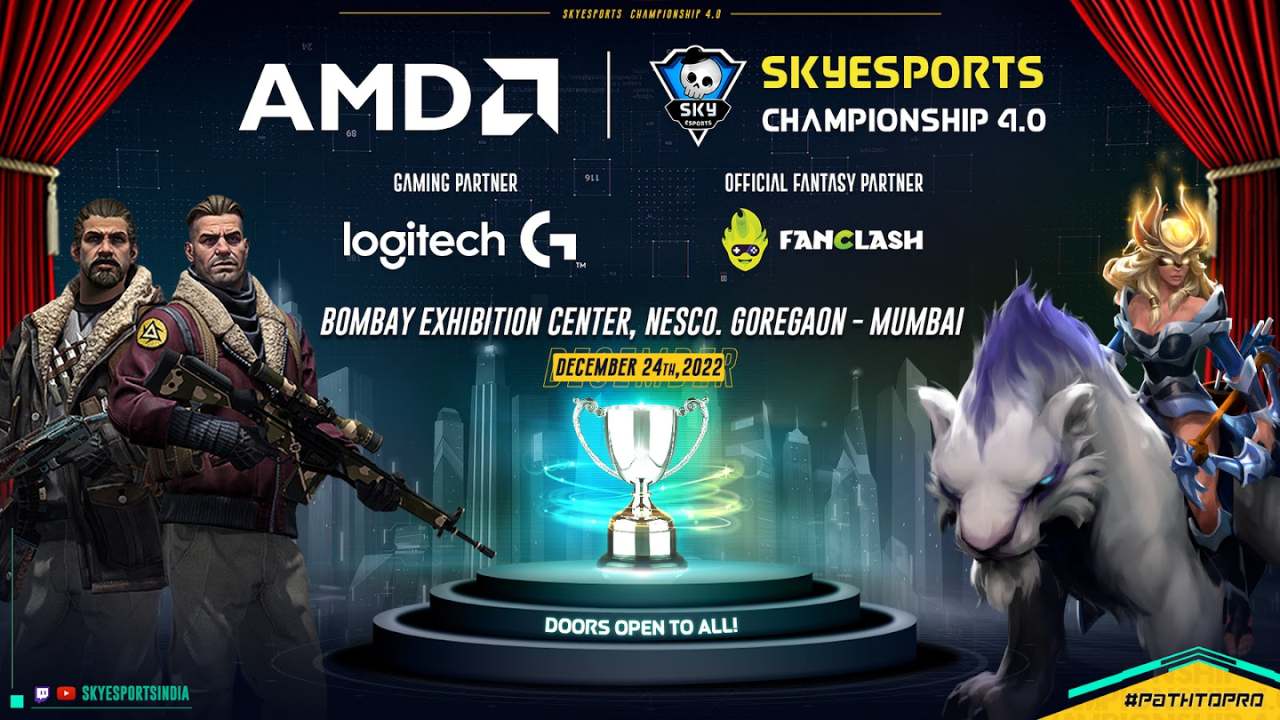 By announcing the return of its premier esports and gaming IP as an on-ground event in Mumbai, India, JetSynthesys' Skyesports is capping up 2022 with a boom. The AMD Skyesports Championship 4.0 Finale is scheduled to take place on December 24, 2022 at the Bombay Exhibition Center, NESCO at Goregaon, Mumbai, with prominent figures from the SEA and India in attendance.

The Skyesports Championship 4.0, presented by global semiconductor manufacturer AMD, will be a delight to fans as the doors will be open-to-all without any entry fee. Leading gaming peripherals brand Logitech G are the Gaming Partners while Asia’s largest esports fantasy platform FanClash is the official Fantasy Partners for the event. These brand partnerships are intended to bring unique fan engagement opportunities for audiences such as creating their own fantasy teams for the matches throughout the tournament.

The AMD Skyesports Championship 4.0 is set to be a spectacle like never before with esports events, music shows, meet-and-greets, and more – offering a one-stop entertainment extravaganza at the heart of India’s financial capital.

What to expect at the esports events

The esports events at the AMD Skyesports Championship 4.0 include the Grand Finals for CS:GO and Dota 2. The events featured open-for-all qualifiers providing a #PathToPro for aspiring players. Currently, the online Playoffs are going on with teams from Southeast Asia and India.

In CSGO, one team from SEA and one squad from India will battle it out for the title in the LAN Finals. So far, the SEA representatives have been locked in as Thai-based Team NKT emerged victorious in the Asian Qualifier to book a ticket to Mumbai.

Besides the bragging rights and the spectacular trophy, there is a lot of money on the line as well. The AMD Skyesports Championship 4.0 CSGO features a total prize pool of $10,000 while there is $15,000 on the line for Dota 2.

The other team in the Skyesports Championship 4.0 CSGO and the two teams in Dota 2 will be determined based on the results of the ongoing Playoffs. You can catch all the action live on the Skyesports YouTube and Twitch channels.

Besides the two PC titles, there is something for mobile gamers as well. Skyesports has announced that the grand finals for the Pokémon UNITE India Open, one of the biggest esports tournaments for the mobile game in the country, will take place at the venue. The Pokemon UNITE India Open featured open qualifiers and has a total prize pool of Rs. 22,50,000.

Adding to the glamor, top creators and personalities across gaming will be in attendance at the event. For the fans who attend, Skyesports will set up special meet-and-greet booths for them to get a chance to interact with their favorite creators up close. Stay tuned to Skyesports’ Instagram, Facebook, and Twitter handles for more information.

Commenting on the grand tournament, Shiva Nandy, the founder and CEO, Skyesports said, “The Skyesports Championship was introduced in 2019 and since then has grown to become a household name in the Indian gaming industry. This year, we are proud to expand its horizons even further with the on-ground event in Mumbai and also welcoming teams from Southeast Asia.The open-for-all on ground event and esports competitions will enable even more engagement opportunities with fans, especially with FanClash joining as the official Fantasy partners.”

Anuj Tandon, CEO of Gaming at JetSynthesys, added, “Dota 2 and CSGO laid the foundation for India's gaming culture a few years ago. These games are perfect for PC esports, and I'm confident that the Skyesports Championship 4.0 LAN Finale will help rejuvenate interest in the two video game franchises in the country. Indians are taking to esports just like our competitive sports events as evident from the viewership for recent tournaments held here. At JetSynthesys, we are excited and raring to take Indian gaming and esports to the next level!”

The Skyesports Championship was formed in 2019 as an event for South India. Since then, the event has expanded year-on-year to now encompass South Asia as well as Southeast Asia. Last year, the Skyesports Championship 3.0 amassed a peak concurrent viewership of 221,000 – a number indicative of the IP’s popularity. Skyesports also hosted an award ceremony for the 3.0 edition with India’s cricketing star Sachin Tendulkar felicitating the winners.