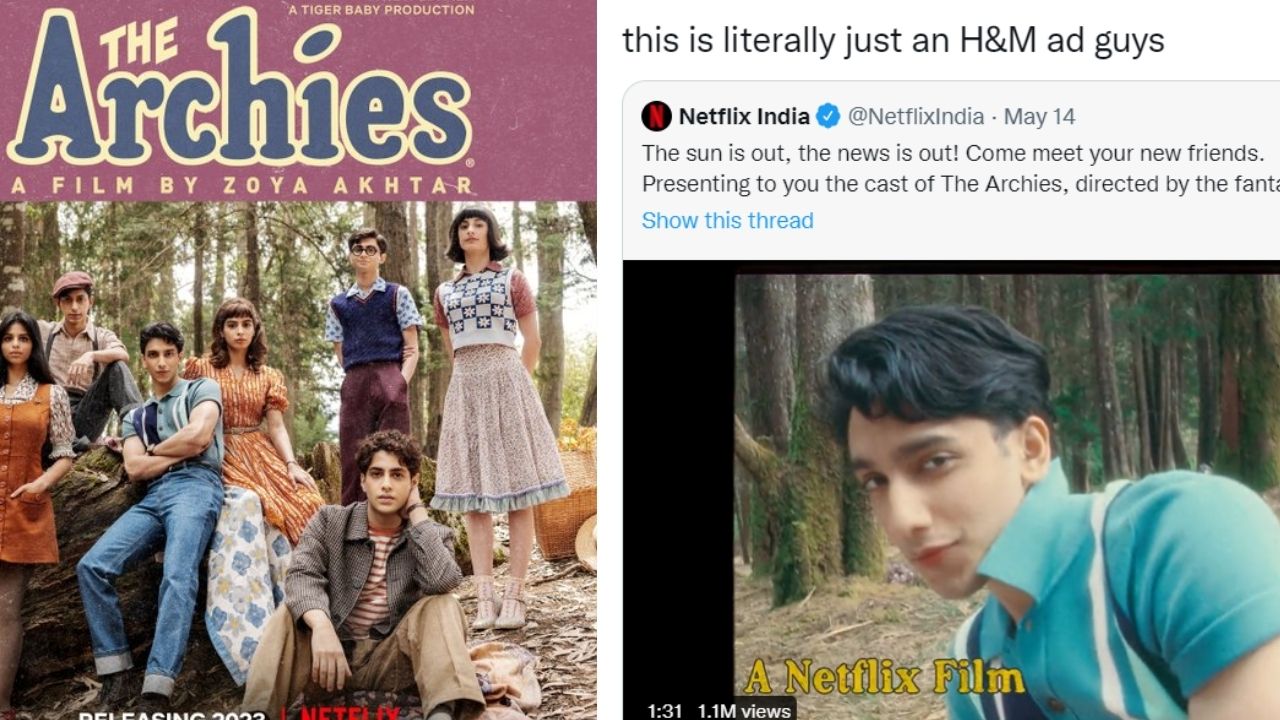 Archies,the Zoya Akhtar’s directorial featuring Srk’s daughter Suhana Khan, Amitabh Bachchan’s grandson Agastya Nanda and Boney Kapoor’s youngest daughter Khusi Kapoor along with others is all set to make it’s OTT debut very soon. Based on the famous children book series Archie comics, the film went on the floor in April. But before it would have gained traction owing to it’s indian adaptation the newly released poster of the film got brutally tolled by the netizens for ot’s starcast lineup which is mostly starkids.

The Archies first poster out

"Archie," one of the most popular children's comic novels, will be adapted for Indian Netflix. As we all know, Netflix already has a series based on the same storyline in its collection. Most people are unaware that Riverdale, which stars Lili Reinhart, Cole Sprouse, KJ Apa, Camila Mendes, and others, is based on the popular Archie Comics series. On Saturday, May 14, Netflix India's official Instagram account shared the first-look poster and a short teaser for the film. On the cover, the complete Archies gang is costumed in 1960s clothing and poses in a woodland scene.

Now as soon as the poster of the film dropped on the screen it became a topic of hot discussion among the netizens who questioned the makers about who they think their audience are? The poster got brutally trolled and became a meme material while some called it Multiverse of nepotism other’s just lashed out on Netflix reminding why their sales isn’t going up in india.

It should be called "THE MULTIVERSE OF NEPOTISM"#Nepotism #Netflix #Archies https://t.co/ov63lJcHZ1

this is literally just an H&M ad guys https://t.co/hWcdTatJWY

If Netflix thinks Archies is competition to Pushpa, Master, RRR, Family Man & Panchayat, it's got its audience really wrong. Unless it wishes to continue bearing the losses for content that it likes, not that which masses like.

Netflix: We don't know why we face losses in India.

I'm fascinated by the backlash against The Archies.

I'm not getting into the nepotism bit. But if you're complaining that this "doesn't look Indian":

My bros, Bridgerton Season 2
(which does the SAME THING* as The Archies)
has been in Netflix India's Top 10 for 7 weeks. https://t.co/8EAzFqcCO0 pic.twitter.com/omrxfGfmZe

Bridgerton season 2 had more Indian representation than this https://t.co/OmfXKR5tji

Characters of the Archies

Suhana will play Veronica Lodge, Agastya will play Archie Andrews, and Khushi will play Betty Cooper, according to reports. 'The Archies,' according to a news source, will be positioned in Ooty
Hansal Mehta marries Safeena Husain after 17 years, know his age, career, family, relationships, children and more.
यह भी पढ़ें