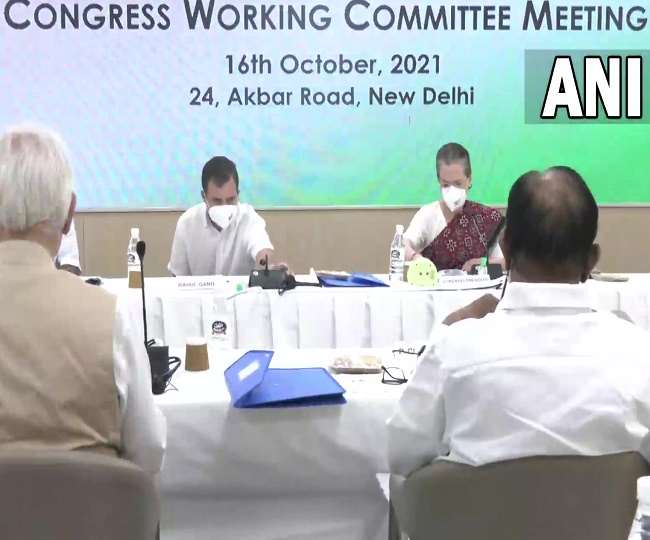 The Congress Working Committee (CWC) is conducting a meeting today i.e., on 16th October as the country’s oldest party is facing political challenges and organizational weaknesses. Amidst the ongoing tussle within the party and the questions being raised, there is every possibility of a decision to start the process of conducting organization elections in the important meeting. According to the information, this meeting has been called on the demand of the dissatisfied camp of the party.

The decision regarding Congress National President likely to be taken:

As per the reports, it is also being stated that in this meeting a big decision can also be taken regarding the post of National President of Congress. It is being stated that this meeting of the Congress party has been called in view of the demand for dialogue from the leaders of the G-23 group and recently many leaders have left the party. Now in such a situation, the question arises that whether Congress will get a new president or whether the command of the party will once again go to the hands of the Gandhi family.

It must be noted that the leaders of the G-23 group including Ghulam Nabi Azad and Kapil Sibal had demanded to convene a meeting of the CWC, in which Ghulam Nabi Azad wrote to Sonia Gandhi saying that the Congress Working Committee to discuss the matters related to the party and to convene an immediate meeting. At the same time, senior leader Kapil Sibal had raised questions on the party leadership amid the ruckus in the Punjab Congress and said that this situation should be discussed by convening a meeting of the Congress Working Committee, and along with it, organizational elections should be held.

The demand to elect a new president going on for the last 1.5 years:

The Congress has been troubled by the demand for the election of a new party president for the last one and a half years, but the paradox is that this period has actually reached the end of the party's scheduled election calendar 2022. The last internal election in the Congress was held in December 2017 for a term of 5 years, but Rahul Gandhi left the post of president midway in May 2019 after the defeat in the Lok Sabha elections. Since then, Sonia Gandhi is looking after all the affairs of the party as interim president.

56 members have been invited to today's meeting:

According to sources, 56 members have been invited to the meeting of the working committee, including the in-charge of the states and special invitees. After the death of Ahmed Patel and Motilal Vora, there are 20 members in the Congress working committee. Former Prime Minister Manmohan Singh is currently unwell and is unlikely to attend the meeting.

According to sources in the disgruntled camp, given the nature of the meeting, it is clear that only the decisions of the high command will be stamped with one voice. However, there are indications that the G-23 camp will not shy away from raising the issue of its leaders leaving the party, from the election of the new president.