List of Best Bollywood Films Depicting Army Valor, Your Heart will be filled with Country Love. 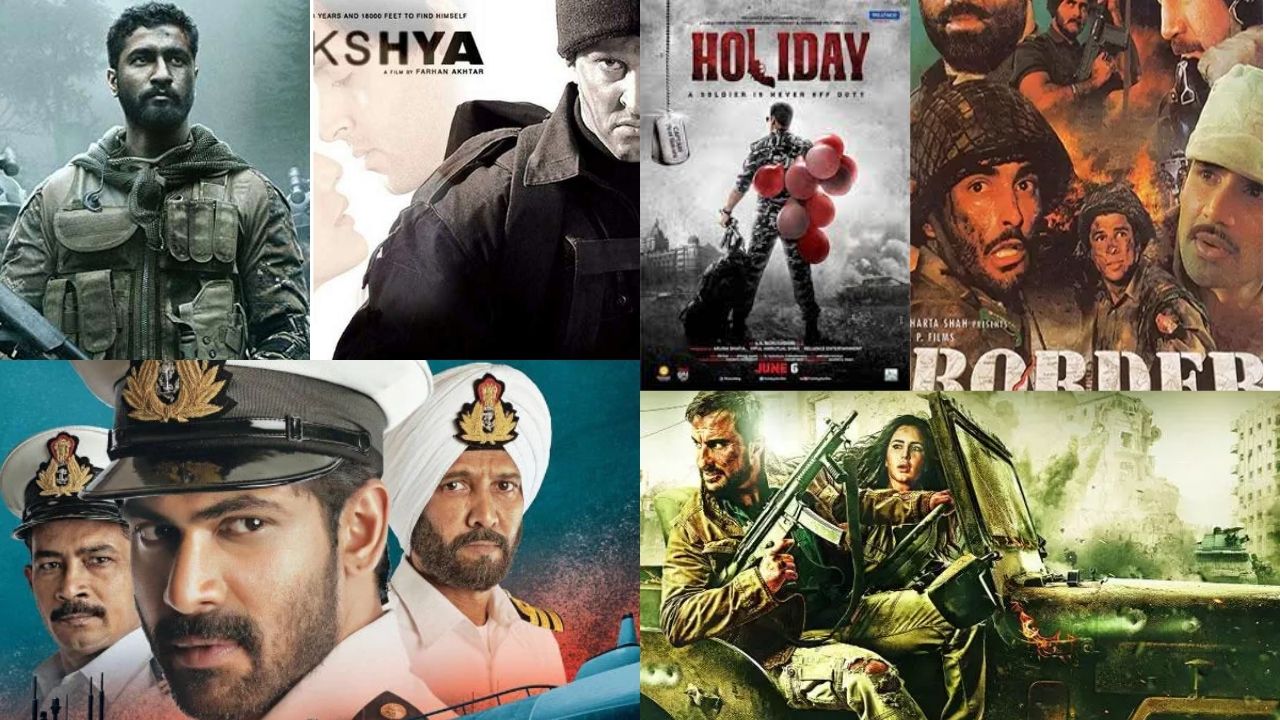 Indian is not just a country, covered by lands and the water, the Indian subcontinent is a habitat to millions of people and thousands of communities. The largest democracy of the world has the most diverse culture in the world. No matter how diverse the cultures and rituals are here, we Indians find our common ground where we can experience shared emotions. Apart from cricket, if there is anything that brings us together as one gigantic family, that is Cinema and our Love for our Motherland-India. Since we are discussing cinema and patriotism, let's take a look at the films which talked about the love for the country and presented enthrallingly emotional narratives of Army, Navy, Air Forces and Intelligence Institutions.

The film Uri: The Surgical Strike was released in 2019. The film based on  the anecdote of the Indian Army’s surgical strike in Pakistan-occupied Kashmir was directed by Aditya Dhar. Inspired by the surgical strik against terrorist groups in Pakistan-occupied Kashmir (PoK) conducted by The Indian Army, the cinematic work was a debutant project of Aditya Dhar. Film’s dramatic dialogues “How's The Josh?”, “High Sir” became a cult phenomena to keep the spirit high in any situation. The film was produced by Ronnie Screwvala. The main cast of the film involved Vicky Kaushal, Yami Gautam, Paresh Rawal and Kierti Kulhari. Mansi Parekh, Akashdep Arora and Swaroopo Sampat were also seen playing crucial roles.

Dedicated to the valour and selfless services of the Indian Army soldiers, the film LOC: Kargil is a narrative of Kargil War that was fought by India army against  Pakistan. The film was an attempt to pay a tribute to Indian Army Operation Vijay and honour the bravery and sacrifice that militants perform to keep the civilians sound and safe. The film was directed by and produced by J.P.Dutta.The major cast of the film included Sanjay Dutt, Ajay Devgan and Abhishek Bachchan etc.

Inspired by the actual events of Battle of Longewala, the film ‘Border’ was set during the Indo-Pakistani War of 1971. The film's plot revolves around a troop of 120 Indian soldiers led by  Major Kuldip Singh, and how the soldiers effectively safeguard their station for one long night against a whole tank regiment of the Pakistani Army. It is a narrative of 120 men soldiers of the Indian Army who fought courageously against the huge PAkistani army which consisted of 2500 men. The multi starrer film included Sunny Deol, Suniel Shetty, Akshaye Khanna, Sudesh Berry, Jackie Shroff, Puneet Issar, and Kulbhushan Kharbanda in the major roles. Film that celebrates the Indian Army is ‘Border’ is directed and produced by J.P. Dutta. The film reunited the audiences and evoked love for the motherland to the core.

Holiday: A Soldier Is Never Off Duty

Akshay Kumar starrer film Holiday: A Soldier Is Never Off Duty revolves around Army man Virat, who visit his home in Mumbai, he discovers a terrorist group. The film celebrates the intellect, intelligence and dedication of an army man. The film features Akshay Kumar and Sonakshi Sinha.

Saif Ali Khan and Katrina Khan starreer Phantom is the story of Daniyal, an Indian soldier who fell from grace and faces a number of trials. His fate takes him to a mission where he has to ill the suspects of 26/11 incident.

The film is based on the 1971 Indo-Pakistan war. The narrative focuses on the mysterious sinking of PNS Ghazi during the war. A Pakistani submarine called Ghazi conspires to attack India in Vizag port. They have to pass the Indian submarine in order to do that. Starring Kay Kay Menon, Rana Daggubati, Tapsee Pannu and Om Puri, this movie portrays the Bravery and Intelligence of the Naval officers of our Indian Navy.

Produced and Directed by Anil Sharma, the film Ab Tumhare Hawale Watan Sathiyo is the story of a young Indian man, Karan, who has to join the army just to take the family tradition ahead. The Army Man soon lands up in the situation where a terrorist organization intends to destroy the harmony and peace of the country. The Bollywood film features Amitabh Bachchan, Akshay Kumar, Bobby Deol and Divya Khosla Kumar in the leading roles.