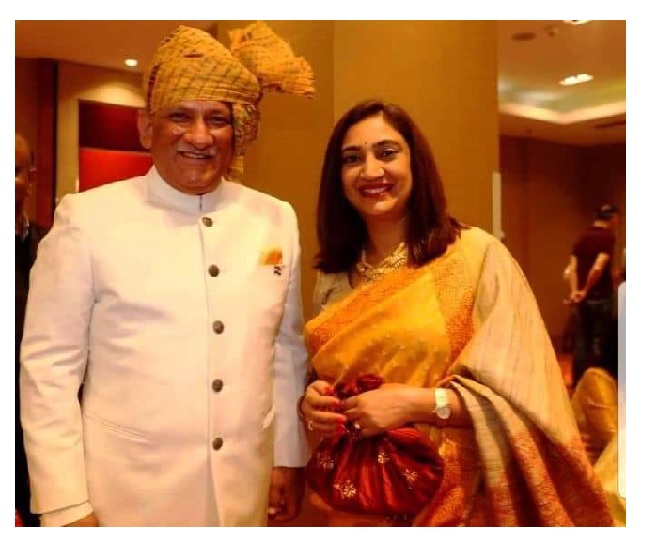 A total of 13 people, including the country's first CDS General Bipin Rawat and his wife Madhulika, were killed when an Indian Air Force helicopter crashed in Coonoor, Tamil Nadu on Wednesday. Other politicians of the country and the world, including PM Modi, have expressed grief over this accident.

Who is Madhulika Rawat?

Mrs. Madhulika Rawat, President of AWWA (Army Wives Welfare Association) and Indian Army Chief General Bipin Rawat's wife. She works for the welfare of wives, children and dependents of army personnel. AWWA India It is one of the largest NGOs. Madhulika Rawat has been a part of many welfare programs and campaigns which lead to heroic. Helps women (army widows) and disabled children.

Madhulika Rawat, wife of CDS General Bipin Rawat, completed her studies in Delhi. She did her graduation in psychology from Delhi University. Apart from Aawa, she was continuously working for various social works especially for cancer victims. CDS General Rawat and Mrs Madhulika Rawat have two daughters. One of them's name is Kritika Rawat.

Bipin Rawat and Madhulika have two daughters. Daughters have lost their parents together. Rawat's one daughter's name is Kritika Rawat and the other daughter's name is Tarini. After this sad news, Defense Minister Rajnath Singh came to meet the daughters and consoled them. Bipin Rawat's wife Madhulika was the President of Army Women Welfare Association. Apart from this, she was also associated with Army Welfare. She used to work for the welfare of wives, children and dependents of army personnel. According to the information, Madhulika Rawat did her graduation in psychology from Delhi University.

Her husband's name is Bipin Rawat. General Bipin Laxman Singh Rawat was born on 16 March 1958 in Pauri, Uttarakhand in a Hindu Garhwali Rajput family. an Indian Army officer by profession. He is known as the Chief of Defense Staff of the Indian Armed Forces. According to the news, an Indian Air Force helicopter crashed in Coonoor, Tamil Nadu on Wednesday (08-12-2021). Chief of Defense Staff General Bipin Rawat was also in the chopper.