Mansukh L. Mandaviya Biography: After the reshuffling of Modi Government Cabinet Minister on June 8, Mansukh Laxmanbhai Mandaviya got the office of Union Minister of Health & Family Welfare India and Chemical and Fertilizers (India).. He is preceding the office of Dr. Harshvardhan Singh after his resignation prior to the cabinet extension. Mandaviya is the Rajya Sabha member from the state of Gujarat.

While Mansukh L. Mandaviya got the important ministry of Health during the ongoing Pandemic situation in the country. While the government got criticism for mismanagement and lack of work and performance during the second wave, the new office ministers will have a lot of responsibility. Meanwhile talking about the new Union Health minister here is everything about him.

Born on June 1, 1972 Mansukh Mandavaiya hails from a small village named Hanol in Palitana Taluka of Bhavnagar district of Gujarat State. He belongs to a middle-class family and is the youngest of his four brothers. He got married to Neeta Mandaviya in the year 1995 and has two children Pavan and Disha. 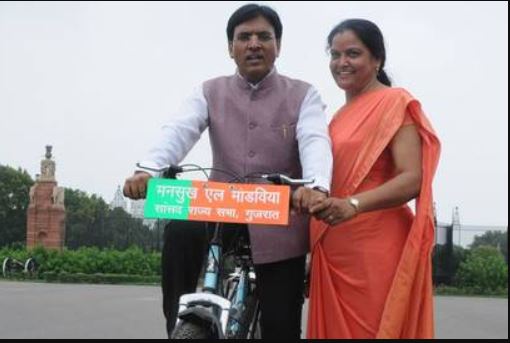 Mansukh did his Masters in Political Science from Bhavnagar University.

Mandaviya held the office of the Member of the Gujarat Legislative Assembly for Palitana for 5 Years.

He was the  Chairman, Gujarat Agro Industries Corporation Limited for one year

He served as the Member of Rajya Sabha for 6 years

Mandaviya was given the office of State Secretary of BJP, Gujarat. He was the Youngest state secretary to hold the office.

He was the General Secretary of BJP, Gujarat in the year 2015.

He was re-elected as a Member of the Rajya Sabha

After the second term win of the Modi Government, Mandaviya got the Ministry of State (Independent Charge) for Shipping and Minister of State for Chemicals & Fertilizers.


The Ministry of Health and Family Welfare

In the first cabinet reshuffle and expansion of the Union cabinet, Mansukh L. Mandaviya got the ministry of MoHFW after the resignation of Dr. Harsh Vardhan.

In the year 2015, Mansukh L. Mandaviya was selected to represent India at the United Nations. He spoke about the '2030 Agenda for Sustainable Development.

He will now handle the Ministry of Health & Family Welfare, Government of India (MoHFW).