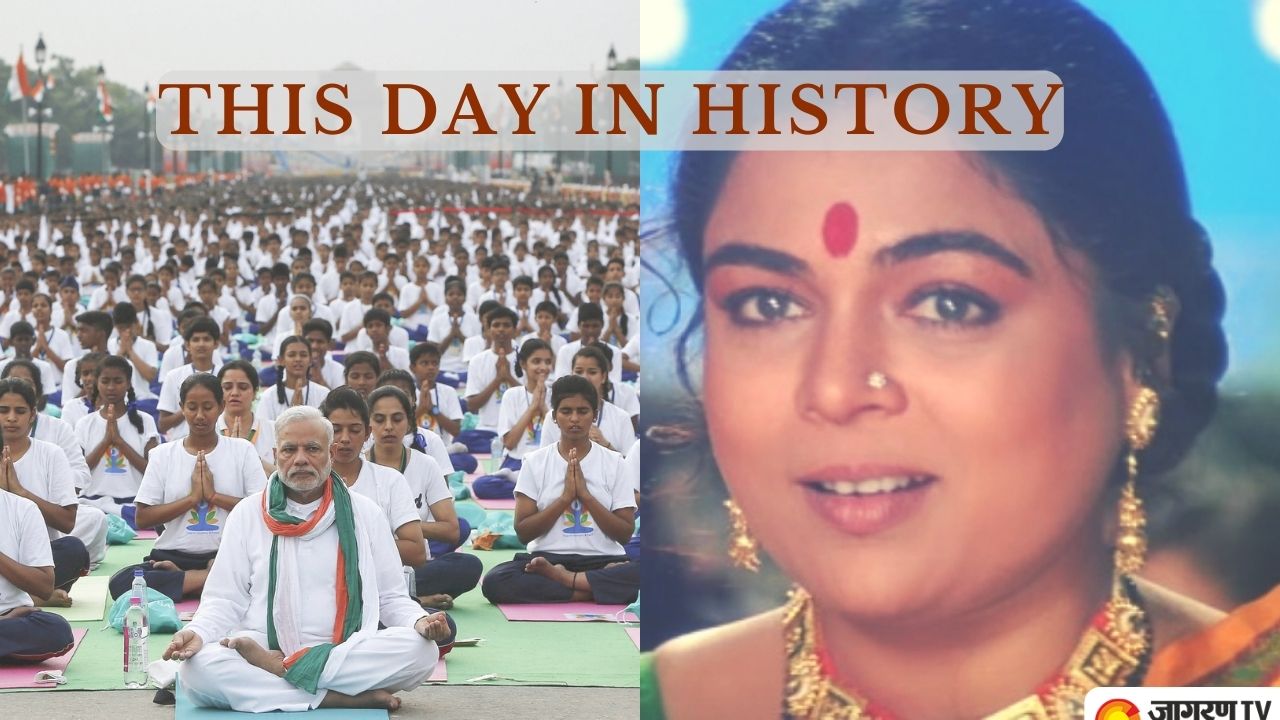 This Day in History: According to the Gregorian calendar, June 21 is the 172nd day of the year and the 173rd day of a leap year.

On this day let’s see some important events and anniversaries. We have compiled a list of some monumental events that happened all around the world on 21 June as well as the birthdays of famous people.

Born on this day in 1983, Abhinandan Varthaman is an Indian Air Force fighter pilot who was held captive in Pakistan for 60 hours after his aircraft was shot down in an aerial dogfight. He was awarded with Vir Chakra by the Indian government for downing a PAF F-16 with his MiG-21 Bison, though his claim has been rejected by Pakistan.

Reema Lagoo was an Indian stage and screen actress who appeared in Hindi and Marathi films. She began her acting career in the Marathi theatre, and in the 1990s and early 2000s, she became well-known for performing motherly roles. After her roles in the 90s iconic TV comedy Shriman Shrimati (as Kokila Kulkarni) and Tu Tu Main Main (as Devaki Verma starring opposite Supriya Pilgaonkar), she was immortalised and became a household figure.

Keshav Baliram Hedgewar (1 April 1889 – 21 June 1940), commonly known as Doctorji, was an Indian physician and the Rashtriya Swayamsevak Sangh's founder Sarsanghachalak (or "Chief"(RSS). Hedgewar established the RSS in Nagpur in 1925, based on the Hindutva ideology and with the goal of establishing a Hindu Rashtra.

“We should always think about how much work we are doing to achieve our goal; and also the pace and honesty-whether it is sufficient enough to accomplish our work.”
- Dr. Keshavrao Baliram Hedgewar (RSS founder) pic.twitter.com/ifGHEoIgc4

On this day in 1991, P.V. Narasimha Rao becomes Prime Minister of India as head of the Congress minority government.

P V Narasimha Rao
June 28, 1921
It is this man that India must credit for laying the foundation for the $ 2-trillion-plus economy, for the transformation from penury to the promise of prosperity.
Accidental PM and Accidental Reforms | June 21 | 2016https://t.co/FEiVMF3nMJ pic.twitter.com/r6SfwIDTw1

On this day in 1576, Mughal army defeated Rana Pratap in the battle of Haldighat.

Maharana Pratap was Hindu king of Mewar. He was titled as "Mewari Rana" and was notable for his military resistance against the expansionism of the Mughal Empire and was known for his participation in the Battle of Haldighati and Battle of Dewair.#MahaRanaPratapJayanti pic.twitter.com/dVVW6yVGWi

This day is observed as World Music Day. Citizens and residents are encouraged to play music in their neighbourhoods and parks on Music Day. Free concerts are also held, where musicians play for fun.

Get your yoga mats and join the country in celebrating International Yoga Day!https://t.co/ELkCDLvDGv#YogaforHumanity #IDY2022 #75IconicIDYLocations pic.twitter.com/sDVzFS8K3O

Japanese resistance on Okinawa was finally crushed this day in 1945, less than three months after U.S. troops landed there as the last stepping-stone before the planned assault on Japan's main islands in World War II.

On June 22nd, 1945, the Battle of Okinawa ends with the last Japanese forces being defeated by the Americans. The capture of this vast island turned into a nearly 3 month battle with a death count of 12,000 Americans and 150,000 Japanese (mostly civilians) #Sacrifices #TheEnd pic.twitter.com/GRW1V5Nzbv