Today in History May 21: From Rajiv Gandhi Death Anniversary to Establishment of FIFA, list of 10 most important events happened today 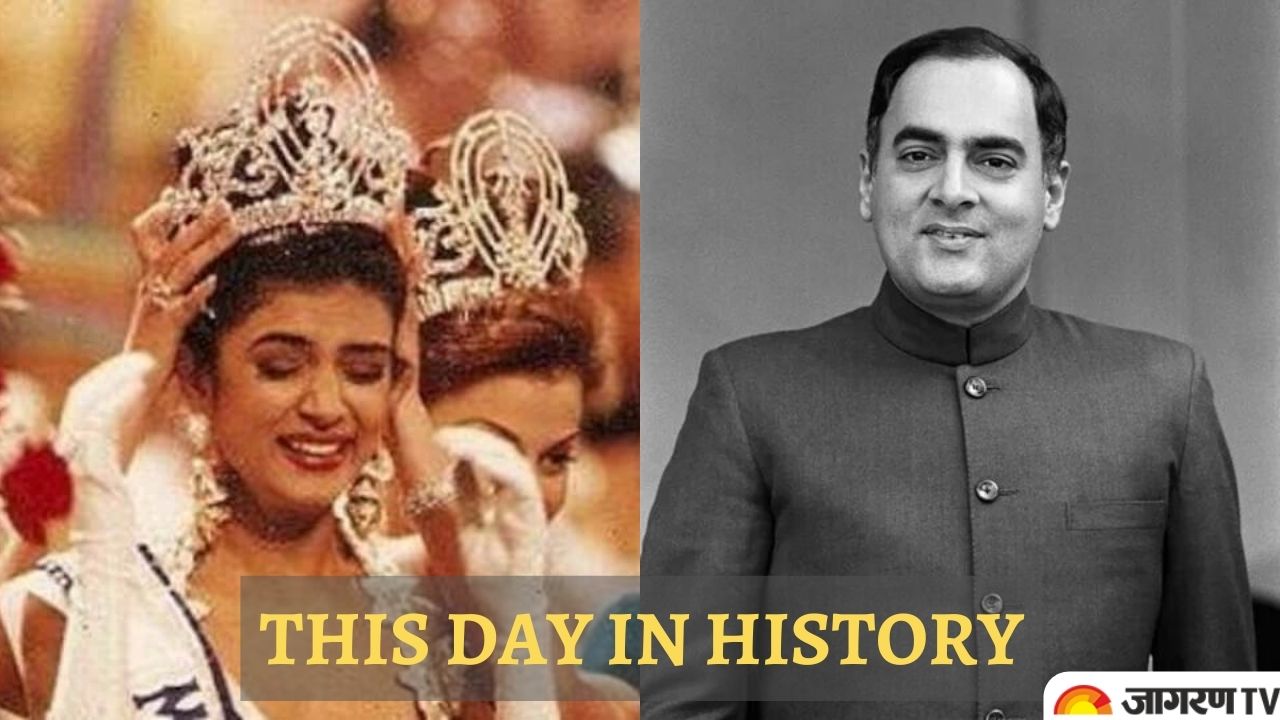 This Day in History: According to the Gregorian calendar, May 21 is the 151th day of the year and the 152st day of a leap year.

On this day let’s see some important events and anniversaries. We have compiled a list of some monumental events that happened all around the world on May 21 as well as the birthdays of famous people.

Ustad Sabri Khan was an Indian sarangi player. His Gharana traces the tradition of its music back to Mian Tansen, the great vocalist in the court of Mughal Emperor Akbar.

Born on this day in 1911, K. N. Ezhuthachan was an Indian writer and scholar of Malayalam literature. He is the first Malayali to win Sahitya Akademi Award in Sanskrit literature.

On this day in1994, Sushmita Sen became the first Indian to be crowned as Miss Universe. Later she became one of the top actresses in the Hindi cinema. Her commercially successful films include Aankhen (2002), Main Hoon Na (2004), and Maine Pyaar Kyun Kiya? (2005) etc.

Today in 1994: Sushmita Sen, aged 18, was crowned the 43rd Miss Universe in Manila,the first Indian to win the title pic.twitter.com/X9RtREpmgA

On this day in 2013, Microsoft announces the release of Xbox One.

Microsoft announces a worldwide release date of Nov. 7 for the Xbox One X https://t.co/SIUrJO9H9a pic.twitter.com/4gF1xHsvOn

On this day in 1904, FIFA-Federation Internationale de Football Association was formed in Paris, France.

#This_day_in_history
On May 21, 1904, FIFA, otherwise known as International Federation of Association Football was founded in Paris
AP Photo/Michael Probst pic.twitter.com/a8OJ0ej5Jq

To deal with the dreadful issue of terrorism, the day of 21 May is celebrated in India as 'National Anti-Terrorism Day. In fact, it is a day to pay tribute to those who lost their lives in terrorist attacks and the day also honours the sacrifice of thousands of soldiers who fought against terrorism. ts official announcement was made on 21 May 1991 following the assassination of India's seventh Prime Minister Rajiv Gandhi, who was killed in Sriperumbudur, Tamil Nadu during a terrorist operation by the Liberation Tigers of Tamil Eelam (LTTE).

We the people of India hereby solemnly affirm to oppose all forms of terrorism and violence......

On National Anti-Terrorism Day (21 May), Ambassador Amrit lugun administered anti-terrorism pledge to all India-based officials of the Mission.@MEAIndia @PIBHomeAffairs pic.twitter.com/xxaos7aGgb

The UN General Assembly in its resolution declared 21 May as the World Day for Cultural Diversity for Dialogue and Development in December 2002. This day is celebrated under the UNESCO adoption of the Universal Declaration on Cultural Diversity in 2001. The day is observed annually on May 21 globally to bridge gaps between different races, cultures, religions, countries and more. This day aims to bring solidarity and harmony between different communities.

Ahead of World Day for Cultural Diversity for Dialogue and Development, check out UNESCO‘s projects driving creativity in the Global South and putting culture at the ❤️ of sustainable development: https://t.co/IwawqH13Th #CulturalDiversity #ShareCulture pic.twitter.com/HWPfqCpkaV

American aviator Charles Lindbergh completed the first nonstop solo flight across the Atlantic Ocean on this day in 1927. He travelled from New York to Paris in the monoplane Spirit of Saint Louis in about 33.5 hours.

95 years ago this morning, Charles Lindbergh departed New York for Paris on a 33 hour flight that would change the world. pic.twitter.com/CyhV7W1idG

On this day in 1932, American aviator Amelia Earhart became the first woman to pilot an aeroplane solo across the Atlantic Ocean.

ON THIS DAY: In 1932, Amelia Earhart took off from Newfoundland to become the first woman to fly solo across the Atlantic.

Because of weather and equipment problems, she set down in Northern Ireland instead of her intended destination, France. https://t.co/zERWi9F2BA pic.twitter.com/4pUVCzwIIg