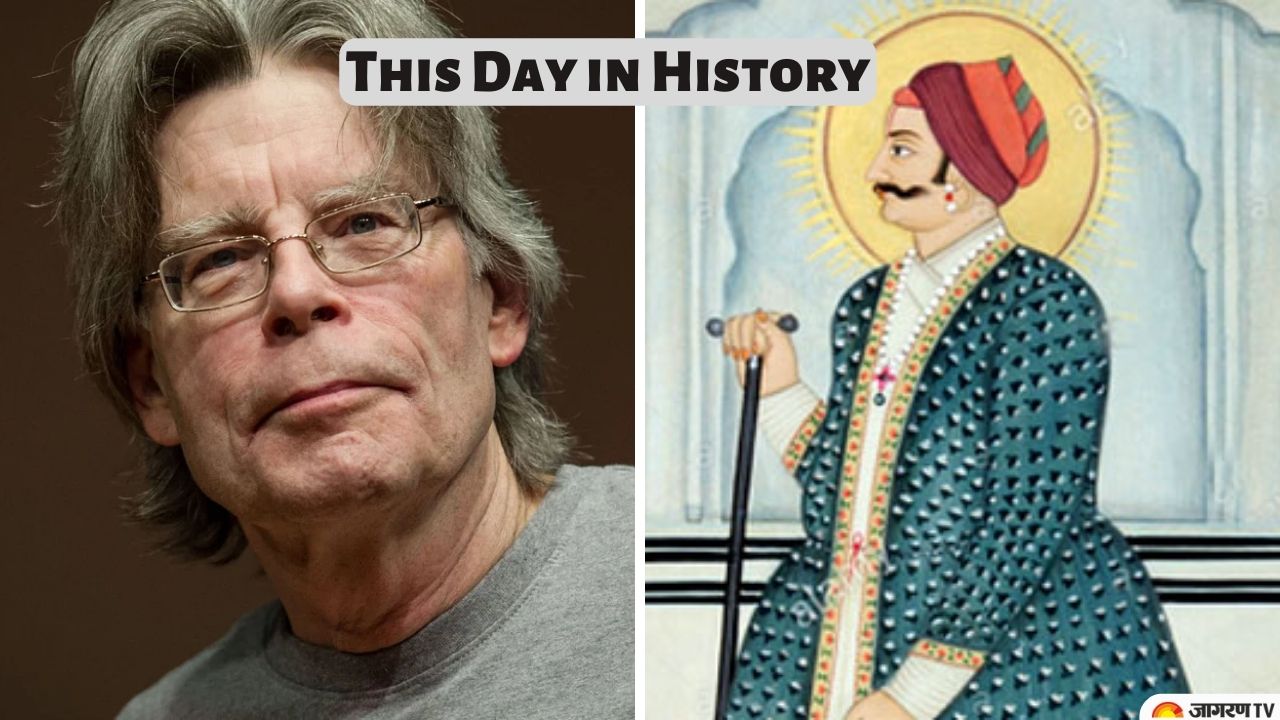 This Day in History: According to the Gregorian calendar, 21 September is the 264th day of the year and the 265th day of a leap year.

On this day let’s see some important events and anniversaries. We have compiled a list of some monumental events that happened worldwide on 21 September as well as the birthdays of famous people.

Born on this day in 1947,  Stephen King is an American author known for his  horror, supernatural fiction, suspense, crime, science-fiction, and fantasy novels. He is described as the "King of Horror". He has also written approximately 200 short stories, most of which have been published in book collections. His books have sold more than 350 million copies, and many have been adapted into films, television series, miniseries, and comic books.

Thank you, Don. Means a lot coming from someone whose work I so admire. https://t.co/kUcHXIJSL8

On this dayin 1743, Jai Singh II who was the Hindu Rajput ruler of the kingdom of Amber passed away. He found the fortified city of Jaipur and made it his capital. He became ruler of Amber at the age of 11 after the death of his father, Raja Bishan Singh on 31 December 1699. Jai Singh was very fascinated by astronomy, mathematics, and architecture. He gave the Jantar Mantar observatories a number of locations throughout India, including his own city of Jaipur. The "Elements of Geometry" by Euclid were translated into Sanskrit by him.

Today is the death anniversary of Maharaja Jai Singh II, aka Sawai Jai Singh, who founded the city of Jaipur, built the Jantar Mantar at Delhi, Mathura, Ujjain, Varanasi and Jaipur. Made significant contribution to astronomy and mathematics, as well as architecture. pic.twitter.com/QtRVluO5XO

On this day in 1949, Manipur became a separate state within India after the Maharaja was coerced to sign a Merger Agreement with the Union of India.

On this day in 1949 Manipur became a separate state within India after the Maharaja was coerced to sign a Merger Agreement with the Union of India. pic.twitter.com/WiD1Gg9kpW

On this day in 1937, English writer J.R.R. Tolkien's The Hobbit, a coming-of-age fantasy that became a classic, was published. It was released in 1937 to a plethora of positive reviews, garnering nominations for the Carnegie Medal and the New York Herald Tribune's award for best young-adult literature. The book is still widely read and regarded as a masterpiece of children's literature.

Happy 83rd birthday to J.R.R. #Tolkien's The #Hobbit, first published 21st September 1937, you can see my copy on the bottom left of the picture 🎂🎂🎂 pic.twitter.com/g3noSajIak

Every year on September 21, people all across the world mark the International Day of Peace (also known as "Peace Day"). Peace Day, which was established in 1981 by a majority United Nations resolution, offers a day on which all of mankind can agree to put peace above all other considerations and work toward fostering a culture of peace.

The International Day of Peace #PeaceDay is observed worldwide on the 21st of September.

We all have a role to play in fostering peace. Tackling racism and ethnicity is a crucial way to contribute to this effort. pic.twitter.com/Z5OESfmC9x

People all over the world dedicate 21st September as Alzheimer's Day for people suffering from Alzheimer's. All organizations meet to create awareness, and organize runs, and charity shows to show support.