Today in History 28 September: From From Lata Mangeshkar's Birthday to the Discovery of California, list of Important events today 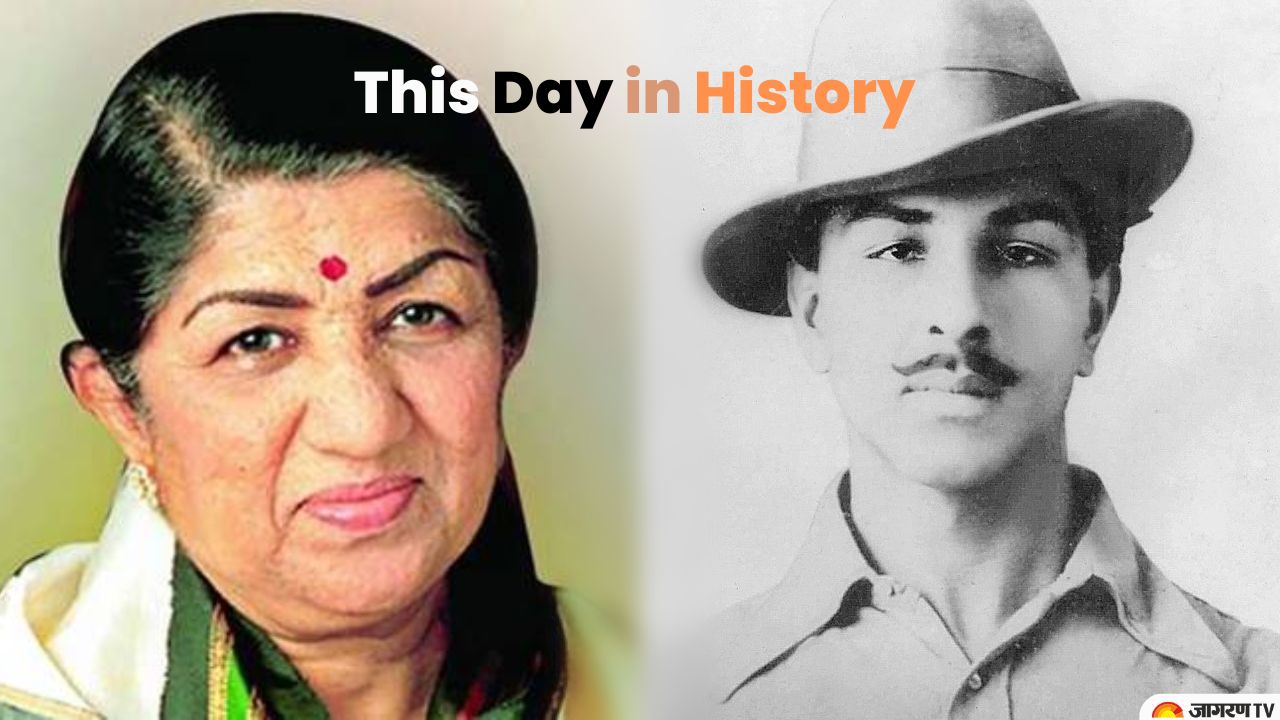 This Day in History: According to the Gregorian calendar, 28 September is the 271st day of the year and the 272nd day of a leap year.

On this day let’s see some important events and anniversaries. We have compiled a list of some monumental events that happened worldwide on 28 September as well as the birthdays of famous people.

Born on this day in 1929, Lata Mangeshkar was one of the best known and the most respected playback singer and music director of India. Her contribution to the Indian music industry in a career spanning eight decades gained her honorific titles such as the "Queen of Melody", "Nightingale of India", and "Voice of the Millennium". She has been awarded prestigious awards like Bharat Ratna, Dadasaheb Phalke Award, National Order of the Legion of Honour and more.

Born on this day in 1907, Bhagat Singh was a socialist revolutionary who fought hard for the freedom of India. He was executed at the age of 23 years and is since a hero of the Indian independence movement. In Lahore, Punjab, in what is now Pakistan, in December 1928, Bhagat Singh and a companion, Shivaram Rajguru, both members of a small revolutionary group, the Hindustan Socialist Republican Association (also Army, or HSRA), shot and killed a 21-year-old British police officer, John Saunders, thinking he was the British senior police superintendent, James Scott, whom they had intended to assassinate. Saunders was still on probation.

On this day in 1837, Akbar II was the second last Mughal emperor of India who reigned from 1806 to 183. Due to growing British influence in India via the East India Company, Akbar had little de facto control. Ram Mohan Roy was sent by him as an ambassador to Great Britain, and he was given the title of Raja. In 1835, when he was in power, the East India Company stopped referring to itself as the Mughal Emperor's vassal and stopped issuing coins in his honour. The Persian lines stating as much were removed from the company's coins.

Bahadur Shah II took over the rule of Delhi

On this day in 1837, Delhi’s reign was taken over by Bahadur Shah II. He was both an Urdu poet and the twentieth and final Mughal Emperor. He succeeded his father, Akbar II, who passed away on September 28, 1837, and was the second son. Because the Mughal Empire only existed in name and his jurisdiction only extended to the walled city of Old Delhi, he was only known as the titular Emperor (Shahjahanbad). After being found guilty of multiple charges stemming from his participation in the Indian Mutiny of 1857, the British deported him to Rangoon in British-controlled Burma in 1858.

Today-in-History (Sept 28): On this day in 1837 Akbar II, known as Akbar Shah II, the 19th Mughal emperor of India died in Delhi whose regime lasted from 1806 to 1837. He was the 2nd son of Shah Alam II & the father of Bahadur Shah II who took over the rule of Delhi. pic.twitter.com/a9TWNMVkNU

Explorer Juan Rodríguez Cabrillo, known as the “discoverer” of California, landed this day in 1542 near what is now San Diego and became the first European to set foot on the west coast of what would become the United States.

September 28, 1542, Juan Rodríguez Cabrillo is the first European to set a foot in #California, at San Diego Bay, naming it San Miguel and claiming it for Spain pic.twitter.com/bouHLBilu6