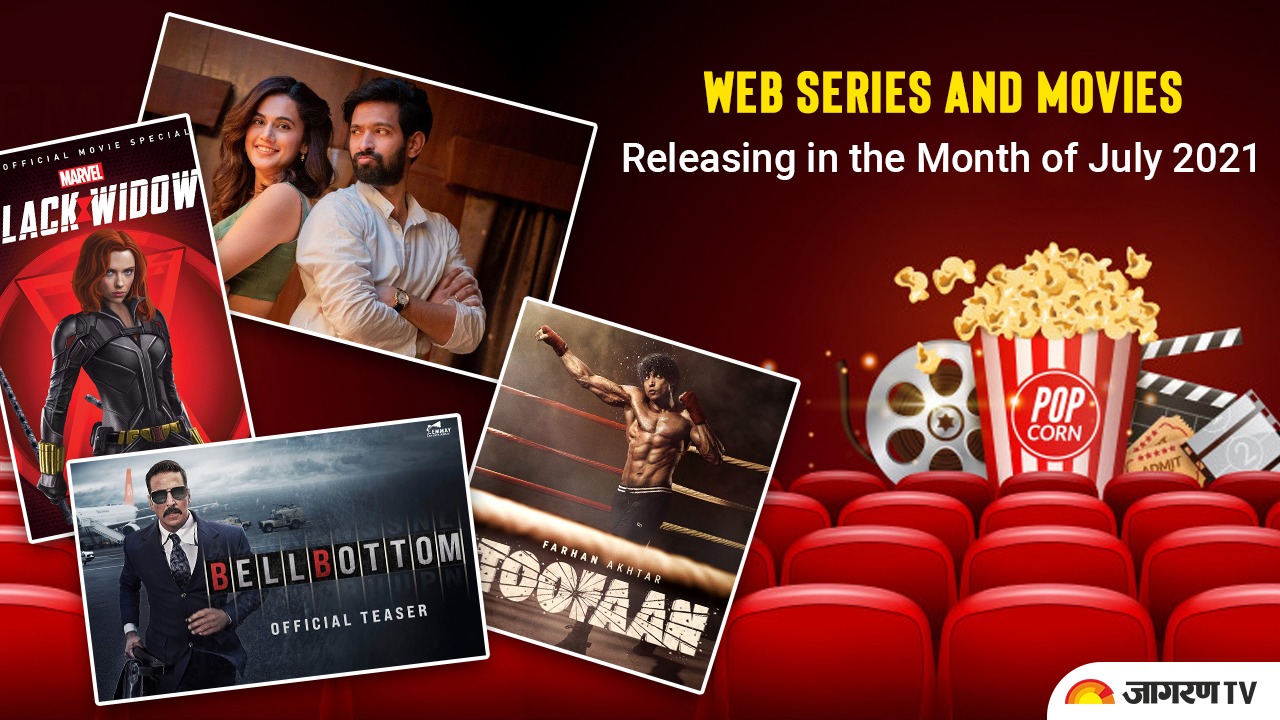 New Movies and Web Series in July 2021: We have already crossed the half-year of 2021 and the pandemic situation is still present. Struggling for more than a year now, we are slowly adapting ourselves to the new Normal. From less outings and more in-house plans, Corona has surely made us couch potatoes. With this new normal we have also catered ourselves to the new digital medium of entertainment. Less to no theatres and sticking to more digital mediums like OTT. So following the trend of the new normal here are the upcoming releases on OTT you can look forward to in the month of July.


The seventh month of 2021 is very important in terms of release. From Haseen Dilruba to mega-budget films like Gangubai Kathiwadi, there will be many films that will be released. While some have confirmed the OTT release we have also included the ones who might get an OTT release instead of theatres. So stay tuned for their updates as well. Meanwhile, see the upcoming streaming from movies, series, documentaries, anime and everything. See the list below.

Akshay Kumar, Vaani Kapoor, Huma Qureshi and Lara Dutta starrer action thriller film is slated to release in theatres on July 27, 2021. In the film Akshay Kumar will be seen playing the role of a RAW agent from the 80s and the story is based on the plane hijacks that took India by storm back then.

Starring Taapsee Pannu along with Vikrant Messi and Harshvardhan Rane, Haseen Dillruba is a mystery thriller film releasing on July 2 on Netflix. It is directed by Vineet Mathew while Aanand L Rai and Himanshu Sharma are the producers of the film. '

The second season of the Netflix series Never I Have Ever will be streaming from July 15. It is a youth romantic comedy show depicting the life of Indian-American teenager Devi played by Maitreyi Ramakrishnan.

The Netflix anthology series is releasing on Netflix on 23 July. The series will feature multiple stories. Let us tell you that, one of the stories is also directed by Tahira Kashyap, wife of Ayushmann Khurrana. This is Tahira's directorial debut.

List of new releases on Amazon Prime Video in July 2021

The film 'The Tomorrow War' is releasing on Amazon Prime Video on July 2. The science fiction film is Written by Zach Dean and is directed by Chris McKay. It stars Edwin Hodge, Sam Richardson, Betty Gilpin, Mary Lynn Rajskub and Ryan Keira Armstrong. Pratt, Rob Cowan, Bradley J. Fisher and Brian Oliver also took over as executive producers. Apart from English, the film will also be released in Hindi, Tamil and Telugu.

Farhan Akhtar starrer Sports Drama Film Toofaan will be streamed on Amazon Prime Video from July 16. In the film, Farhan plays the role of a street boxer. The film also stars Mrunal Thakur and Paresh Rawal in important roles.

With humility, love and in dedication to the fighting spirit of the beautiful people of our nation, our film ‘Toofaan’ will be releasing on July 16th. #ToofaanOnPrime

List of new Releases on Disney+ Hotstar in July 2021

Film Caller Bomb will release on July 9 on Disney Plus Hoster VIP. The film stars Jimmy Shergill and Asha Negi in lead roles and revolves around the story of stopping a suicide bomber. Jimmy will be playing the role of a police officer named Manoj Hessey.

List of New Releases on MX Player in July 2021

The series 'State of Siege: Temple Attack' will be premiering on July 9 on Zee5. The story is inspired by true events and revolves around the terrorist attack on the Akshardham temple in Ahmedabad. Doing his OTT debut, actor  Akshaye Khanna is playing the lead role.

List of New Releases on Sony Liv in July 2021