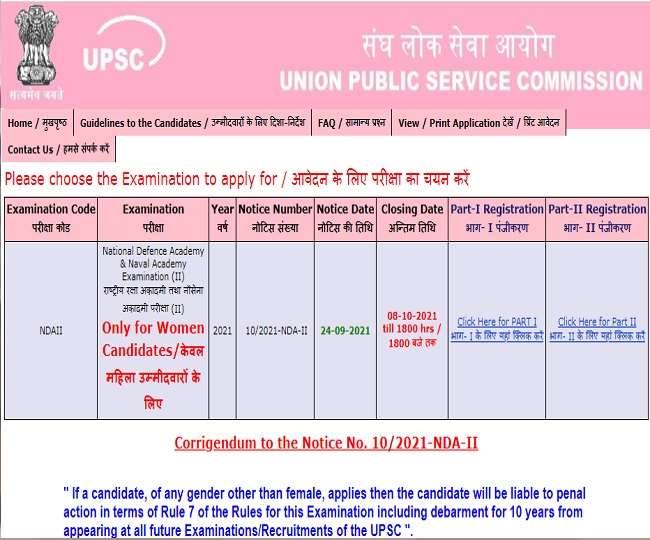 In compliance with the Supreme Court order, the Union Public Service Commission (UPSC) has re-opened the application window for applications for inclusion of women candidates in the NDA exam.

UPSC has released an important notice for appearing in the second edition of the NDA exam, which is to be conducted twice a year, for the year 2021, opening the application window for female candidates only from today, 24th September 2021. According to this notice, the last date to apply for the NDA 2 Exam 2021 for women (unmarried) candidates is until 8th October 2021.

As per the NDA 2 Exam 2021 notification released by UPSC, candidates who have passed the Class 12th  examination or equivalent examination from a recognized board or university can apply for Army.

Whereas, for Air Force Wing and Naval Wing, candidates must have passed their Class 12th examination or equivalent examination with Physics, Chemistry, and Maths subjects. In addition, the candidate must have been born not earlier than 2nd January 2003 and not later than 1st January 2006.

Physical Standard and number of vacancies to be announced later:

According to the notice issued today, 24th September 2021, the physical standard for women candidates and the number of seats reserved for them will be issued after receiving information from the Ministry of Defense, Government of India.

It must be noted that UPSC released the notification for NDA 2 Exam 2021 on 9th June 2021, in which a total of 400 vacancies were declared. Of these, 370 are from the National Defense Academy (Army, Navy, and Air Force) and 30 vacancies are from the Navy (10+2) Cadet Entry Scheme.