Viral video of Shehnaaz Gill on the ramp walk as a beautiful bride, grooves to Sidhu Moose Wala song 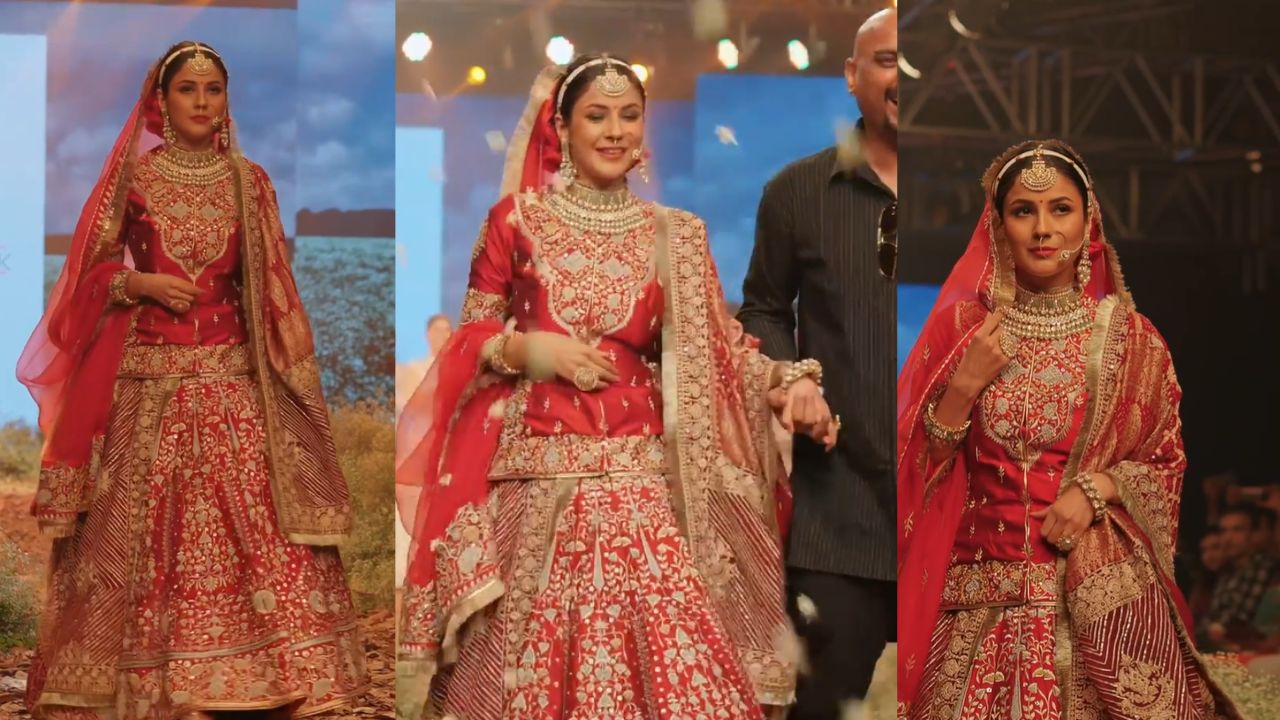 Shehnaaz Gill leaves no stone untouched when it comes to captivating fans with her breathtaking beauty and pleasant persona. The actress recently made her runway debut for designer Samant Chauhan, and everyone was drooling over her bridal look. Shehnaaz was decked in a traditional red lehenga and walked the ramp blushing with that innocent expression that fans adore. She then twirled around flaunting her magnificent lehenga, but it was her paying respect to Sidhu Moosewala by dancing to his song 'Sohne Lagde' that stole the Internet's heart.

Shehnaaz Gill walks the ramp as a bride

Shehnaaz who is soon to mark her debut in Bollywood can be seen these days doing a lot of portfolio shoots, the glimpse of the same she keeps updating on her social media and among her friends and families. The Bigg Boss fame this time too took to her Instagram to drop the video of her ramp walk and wrote  "Debut walk done right! Walked for the super talented designer @samantchauhan." She also thanked the audience for their love and support. "Thank you people of Ahmedabad for making us extra special for me! Your hospitality and love is immeasurable. #ShowStopper #ShehnaazGill,"

On 29th May 2022, we lost a legendary Punjabi singer Sidhu Moose wala. Sidhu was one of the most adored and followed personality of Punjab, Shehnaaz on the other hand too paid her tribute and mourned his demise. The actress was now seen dancing on one of his most famous songs Sohne Lagde and that won fans heart.

Seems like Shehnaaz after a long break is finally ready to give a good competition in the showbiz world. A user wrote “Wah Sidhu ka song or apki walk.MASHA ALLAH.love from pakistan.sidhu miss u’ other while referring to Late actor Sidharth Shukla wrote ‘
Bro, he is proud of you, whistling from the sky and hooting for you... Shehnaaz Shehnaaz Shehnaaz Shehnaaz woooahhj Shehnaaz, ‘Most gorgeous punjabi bride”, “Looked fabulous in your debut. A gorgeous bride’ and so on

Shehnaaz is set to make her Bollywood debut with the film 'Kabhi Eid Kabhi Diwali,' which is due to release theatres in December 2022. She is confirmed to play alongside Aayush Sharma in the Salman Khan-directed film.
G20 Summit 2022: Know what is G20, it's importance and how will India host the 2023 Summit
यह भी पढ़ें