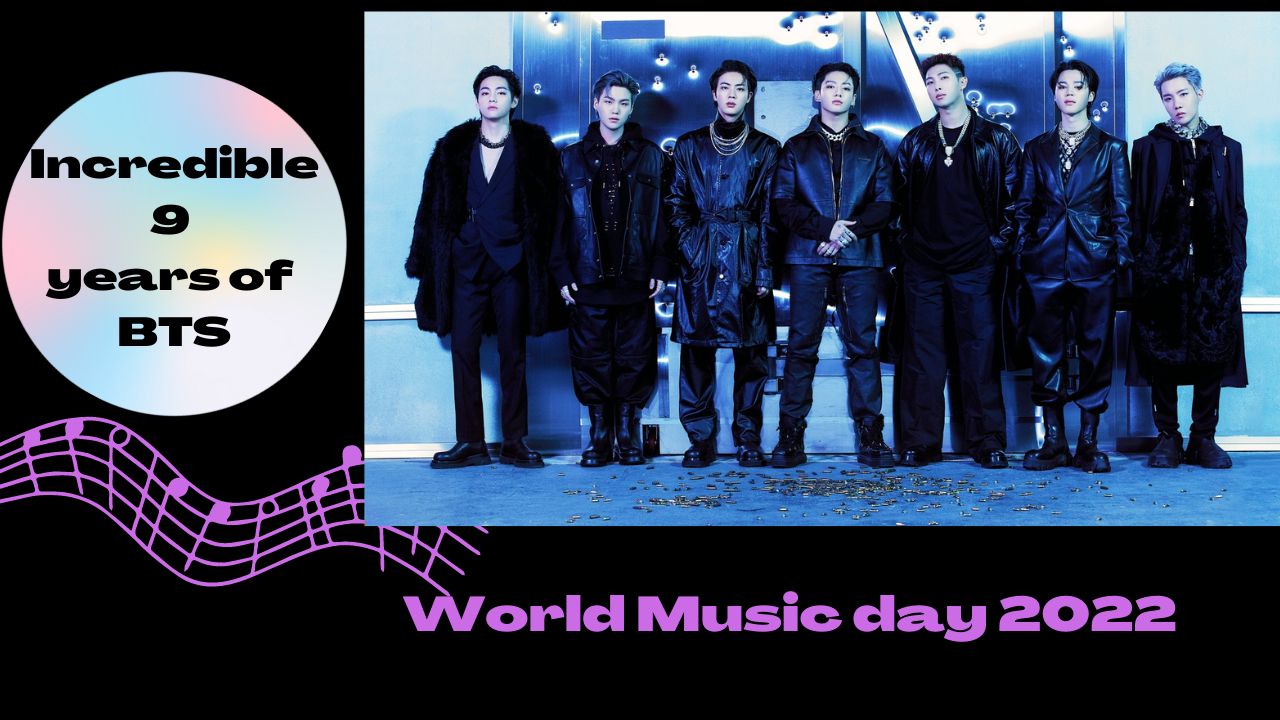 BTS turns 9:  Let's get right to the point. BTS, or Bangtan Soneyondan, a seven-member boy band from South Korea, an Asian country, eventually became the first to challenge the western music industry. BTS, composed of Jin, Suga, J-hope, RM, Taehyung, Jimin, and Jungkook, got a chance, owned it, and conquered it like a boss. Today, BTS is known as the biggest boy band in the world, with the largest fandom known as the BTS ARMY. The West has undoubtedly given the world some incredible music and musicians, including One Direction, Backstreet Boys, the Beatles, and others, but this was likely the first time the west was exposed to Asian music wave, proving that language is no barrier when it comes to music.

BTS the rise and shine of the K-pop band

Who knew the 7 member boy band who debuted in 2013, would became synonyms with the name of Korean pop music, if today the world knows about K-pop then a large section of credit goes to BTS, not only K-pop but the band is also responsible for contributing to a significant part of South Korea's economy boosting travel and tourism, cultural interest and more.


The seven-member band steadily gained fame outside of Korea and established a position in the global music industry thanks to their breathtaking dance performances, amazing vocals, and a rap section the combination the world had never seen before. Their upbeat marketing technique added icing to the cake. During the COVID-19 pandemic, BTS established itself as a global sensation in the United States.

BTS made their debut in June 2013 with the single album "2 Cool 4 Skool," and the slow and steady catch up proceeded with Skool Luv Affair," The Most Beautiful Moment in Life, Pt. 1 and 2, until the 2016 Blood Sweat and Tears phase proved to be the biggest breakthrough and BTS cracked a new milestone in their career. The song has received 879 million views since it was initially released. BTS performed "DNA," which has 1.4 billion views and made them the first K-pop boy band to perform on an American awards show. In the same year 2017, BTS received their first Billboard music awards


BTS is the first Korean band to reach the top of Billboard's main albums list in 2018. Since then, BTS has soared to new heights as its back-to-back songs Fake Love, Dynamite, Butter, and Permission to Dance became worldwide music sensations, and the band began to dominate the Billboard music list with group songs and solo performances. Jeon Jungkook, the youngest member of BTS, was even labeled the Billboard singer, while BTS was dubbed the Billboard kings.

BTS impact on the west

BTS was the first to introduce their country's culture and systems to the West and other Asian countries, as well as a larger global audience particulary in countries such as the United Kingdom, Australia, India, Japan, Russia, and Canada. They've voiced their support on a number of crucial topics, including their roles as ambassadors for UNICEF's global #EndViolence campaign. The youth enthusiastically embraced their "Love Yourself" campaign. BTS made history when they became the first band to meet with President of the United States Joe Biden to discuss anti-Asian hate crimes. Each member of the band is involved in charity works and donate a significant part of their earnings for nobel causes, making their world wide acquired fandom to follow their idols. As a result many campaigns and support groups in different parts of the country are now running under their name and banner independently.

BTS and the Grammys saga

The Grammys have nominated BTS twice, but they have never won any prizes in those two nominations, leading to the argument that BTS does not require a Grammy, but it is the Grammys, whose viewership skyrocketed as a result of BTS's large acquired fandom this year. So anyhow  it’s a win-win situation for BTS.

The word Hiatus started trending right away the moment BTS announced taking a break and focusing on the solo career for a while during their 9th anniversary Festa. This came following their comeback with a new album entitled PROOF which is an anthology of all their past, present and new songs. But, the point here is the social media sites started crashing as soon as the news made it to the live, the number of people who don’t want them to diaband is so huge that the label behind BTS HYBE had to wake from their sleep to inform ARMY that it’s just a break and that the group is not splitting so no need to worry here.
Hansal Mehta marries Safeena Husain after 17 years, know his age, career, family, relationships, children and more.
यह भी पढ़ें