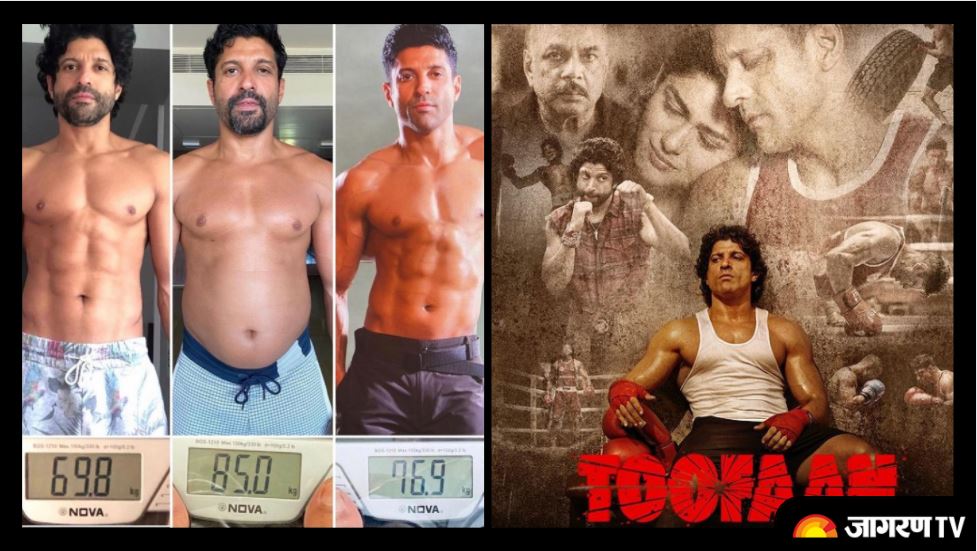 Toofaan: When it comes to prepping up for a role in a film, our Bollywood celebrities leave no stone unturned to give their best in it. From feeling the character from inside to going from major body transformation, they do it all. Recently, Farhan Akhtar shared his weight transformation journey for his sports drama film Toofaan. From chiselled the body with six packs abs to gaining fat and having a family back to again a chiselled body, Farhan has gone through a major weight journey.

Sharing his epic journey for the film, Farhaan shared his weight transformation process for the film. For the initial shots, he cut down his weight and made his body fit by having abs and muscles. Later for the middle part of the movie, Farhan went through a major weight gaining process and gained a lot of fat with 85 Kgs weight. Later Farhan again went into the weight loss process and shredded down around 10 kgs to become a fit boxer.


Sharing his journey on Instagram, Farhaan wrote, “The many shapes and sizes of Ajju aka Aziz aka Toofaan. What a ride. 18 months of relentless work but worth every drop of sweat, every sore muscle and every pound gained and lost. ✊🏽 The stars behind the scenes - @samir_jaura @drewnealpt @anand.physio 👊🏽.

Let us tell you that this is not the first time that Farhan worked hard on his body for a role. Earlier, for Milkha Singh’s biopic ‘Bhaag Milkha Bhaag’ too, Farhan put down weight and gained muscles. He worked hard to create an athlete body that is generally slimmer and has muscles.

Directed by Rakeysh Omprakash Mehra the film Toofaan stars Farhan Akhtar as Aziz Ali (Toofaan) aka Ajju Bhai, Paresh Rawal as Coach Narayan "Nana" Prabhu Mrunal Thakur as Dr. Ananya Prabhu, Aziz's Girlfriend and wife. The film was released on July 17 on OTT platform Amazon Prime Videos. The film is gaining a lot of appreciation for its story, acting and as well as songs.