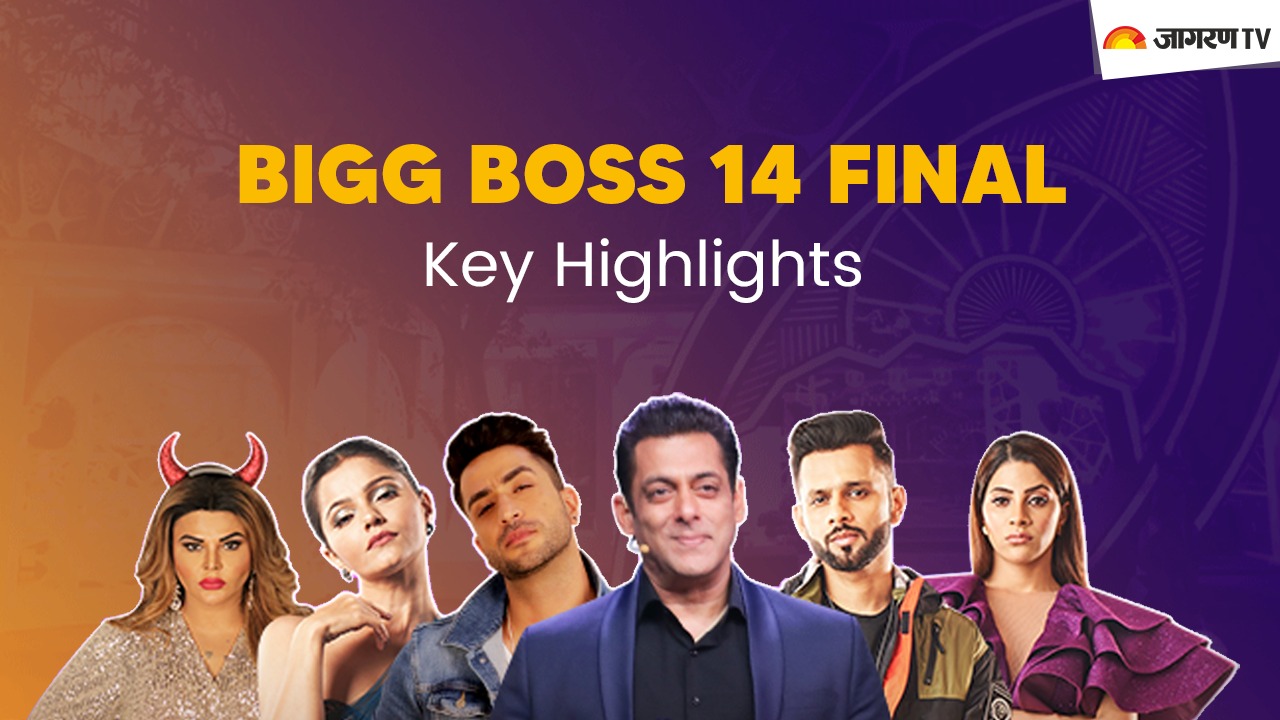 Bigg Boss 14 Grand Finale Live Updates: Witnessing a roller coaster journey of 140 days, Bigg Boss 14 has now finally come to its end. The journey of 23 contestants from which 5 of them trailed their way into the finale. Rubina Dilaik, Rahul Krishnan Vaidya, Aly Goni, Rakhi Sawant and Nikki Tamboli became the top 5 finalists of the 14th season and are all waiting to know who won the support and maximum votes from the audiences.

On a star-studded night with the host, Salman Khan,  Bollywood celebs including Madhuri Dixit, Dharmendra, Ritesh Deshmukh, Nora Fatehi and others will lit up the Grand Finale of the most loved celebrity reality show Bigg Boss 14.

The finale will also witness special performances of our 5 finalists and the other housemates who entertained the audience in this season.

Stay Tuned with Us for all the Live updates below.

Rubina Dilaik wins the season finale trophy and becomes the winner of Bigg Boss 14. While her struggle and entertainment won the hearts of audiences she also got the maximum support and votes. Rahul Vaidya win the tile of first Runner-up of Bigg Boss 14.

Now the votes will decide who will win the trophy.  Soon the winner will be announced

Nikki Tamboli was one of the straightforward and so-called rude contestants of Bigg Boss 14. But winning the hearts of the audience by her fixed game and will to win the show he became the 2nd runner-up of Bigg Boss 14 and now etched her name in the hearts of everyone.

Bollywood superstar gives his special appearance on Grand finale while having a blast on the stage with his ‘Yamla Pagla Deewana’ steps. He blesses all the contestants while sharing the story of his fans with everyone. Gives his love advice to contestants, while Salman becomes Gabbar and Rakhi dances as Basanti.

Lighting up the mood she gives a sizzling hot performance on ‘Chod Dengey’ and ‘Saki Saki’ and gives all the best wishes to top three contestants Rahul Vaidya, Rubina Dilaik and Nikki Tamboli. She also tickles the funny bones by bringing her magical lamp of Genie.

Rakhi Sawant wins the special task brought by Ritesh Deshmukh. Ritesh gives the chance to all the finalist to win the money which was sacrificed by Rakhi to enter the finale. Rakhi Sawant presses the buzzer fastest and wins the task and 14 Lakhs INR, while her journey to become the Winner ended.

Just before the announcement of the winner of Bigg Boss 14, Aly Goni got evicted due to fewer votes. Aly Goni's journey ends as he gets lower votes than Nikky Tamboli.

Dhak Dhak Girl Madhuri Dixit introduces the top 5 finalists of Bigg Boss 14 in the Grand Finale while announcing her upcoming show ‘Dance Deewane’. The Dance reality show will start on 27 February and will bring the best dancers across the country. The show will air on ColorsTV.

From the entry and exit of housemates to the ‘Tod-Fod’ grand finale starts with highlights of the Bigg Boss season 14. And how to forget the use of words ‘Content’ and ‘Maker’. From all the fights to the season of Love this season was packed with lots of Entertainment.