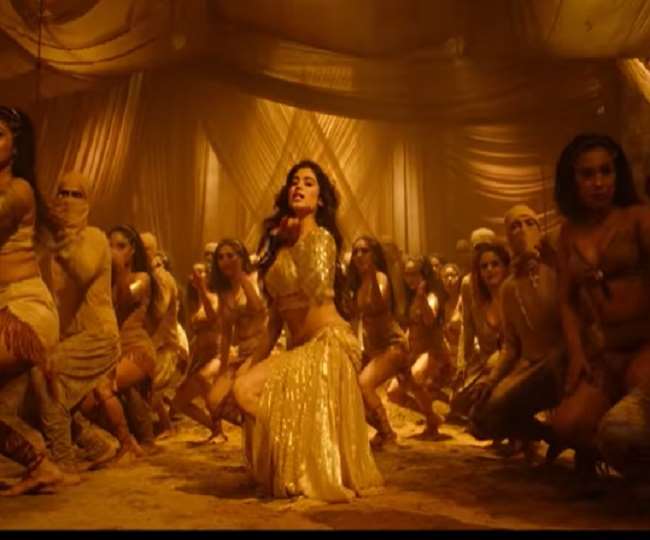 Bollywood actress Jahnavi Kapoor and Rajkummar Rao's popular film 'Roohi' is very much in the headlines these days. While the film is all set to release on 11th March, 2 songs ‘Panghat’ and ‘Kistoon’ which were released previously have managed to make their way into the playlist of audiences.

Meanwhile, another song from the film has released and it's trending like wildfire. A new song titled ‘Nadiyon Paar’ got released on 3rd March and Audiences are liking it very much. ‘Nadiyon Paar’ is a remake version of Shamur Group's famous track 'Let's the Music Play' released in 2004, written by Chris Barbosa and Ed Chisolm. Its Hindi version has been sung by Sachin-Jigar.

In the new song, Janhvi has brought up her sensual avatar and all the viewers have gone crazy over her moves and expressions. The bold look and those amazing dances of Janhvi were never seen before. Though Janhvi’s dance skills can be seen through her Instagram videos as the actress frequently shares videos from dance rehearsals.

But ‘Nadiyon Paar’ has surely blown everyone’s mind. This song of 2 minutes 27 seconds is the perfect party number and has managed to trend at number 1 on YouTube. The songs have reached more than 13 Crore and 253k likes on YouTube in 24 hours.

The actress also shared her Video and pictures from the photoshoot wearing the outfit from the song. Janhvi thanked Manish Malhorta for her designs. She took on Instagram sharing the pictures and wrote, “Tbh #NadiyonPaar I just hope there’s a big fat cheesecake waiting for me.”

Well, we just can have enough from the golden goddess. And those moves and expression? It’s like Janhvi 2.0 is ready to conquer the industry.

Let us tell you before that two songs from the film 'Panaghat' and 'Kiston' have been released. The film Roohi starring Jahnavi Kapoor, Rajkumar Rao and Varun Sharma is releasing in theatres on March 11. Roohi is produced by Geo Studios and Dinesh Vision's company Maddock Films and Mrigdeep Singh Lamba. Dinesh Vijan had earlier made the horror-comedy film Stree which was quite successful. The film is directed by Hardik Mehta. Ruhi's name was formerly Ruh Afza, which was changed to Ruhi Afza, and now only 'Ruhi'. Ruhi was announced in 2019. The film was scheduled to be released in June last year, but the release of the film was postponed like the rest of the film due to the closer of the cinema in Pandemic.

Watch the Song Below-