Family Man Season 2 Review: Srikant is back to save, Samantha marks her strong presence with Digital Debut 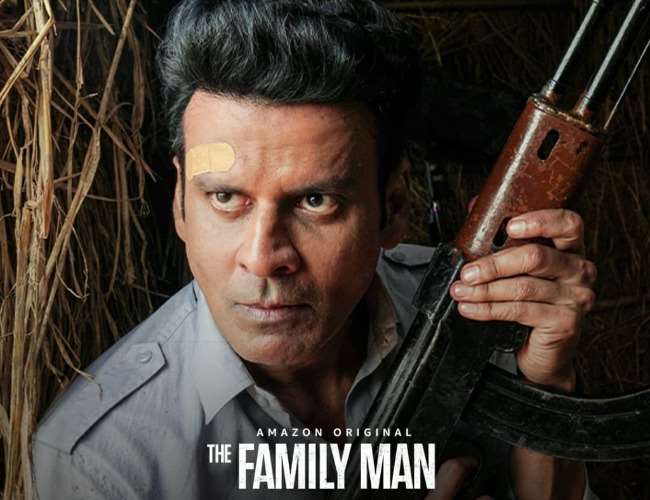 The Family Man 2 Review: Finally! He is back. After 'The Family Man', Manoj Bajpayee returns as Shrikant Tiwari returns after almost 20 months with the most awaited season 2 ‘The Family Man 2’. From 20 September 2019 to 3 May 2021, twenty months have passed in our life while waiting for another epic journey of Sri and to witness how he manages to keep juggling between his life and family. While we have spent 20 months there's not much change in Srikant’s life as only 1 year has passed in his time frame.

While we have been hit by two waves of coronavirus in these 20 months, there is no impact of Covid-19 in Sri’s world and also no mask is needed. But wait and brace your hearts as this is coming as there is a perfect surprise for you. Srikant’s world will wear a mask and things will get impacted with new normal. Now you will ask why? Then let us tell you in the end of the series Srikant gave us the hint of the next season and  Shrikant Tiwari will return once again to expose the scariest conspiracy of this century, that too in Kolkata. We just can’t be happier. Another wait for another epic series to come. But Before that let's see what ‘The Family Man 2’ holds for us.

Sneaking into the current world of Srikant thenour Senior Analyst of Secret Intelligence Organization T.A.S.C. is doing his corporate job carrying the burden of dozens of deaths in the Delhi gas leak incident. On this pretext, Sri is trying unsuccessfully to get his family life back on track. But, my heart and mind are still engaged in the task. The colleague and friend JK keep on getting news from Talpade frequently about his past office and work.

The story of the second season of The Family Man is oscillating between Mumbai, Delhi, Chennai, Sri Lanka, London, France, but the main storyline is based on Chennai. Tamil rebels in the northern region of Sri Lanka have declared their Government in Exile. This government is headed by Bhaskaran, who, along with his confidant Deepan and younger brother Subbu, is fighting for a separate country for Tamil-speaking people. The rebels are fighting their war with both weapons and diplomatic means.

Budding Threat to the Country

France and the UK are going to recognize the rebel Government in Excellence. Their effort is that if India recognizes their government, then the claim of a separate Tamil country will be strengthened. After a major attack by the Sri Lankan army on a rebel camp in Sri Lanka, Bhaskaran and Dipan flee to London, while Subbu tries to pressure the Indian Prime Minister to recognize his Government in Excellence through sympathetic politicians hiding in Chennai.

On the other hand, China wants to build a port in northern Sri Lanka, which can be a threat to India's security. To stop China's dominance in the Indian Ocean, India does not want this to happen at any cost. Indian Prime Minister Basu offers Sri Lankan Prime Minister Rupatunga to build the port, but the Sri Lankan PM makes a condition that he will allow India to build the port, but for this, he will have to hand over Rebel Subbu to Sri Lanka, who is hiding in Chennai.

Despite the refusal of the intelligence agencies, the Prime Minister agrees to it. Subbu is caught. On the other hand, after failing in the first season, ISI now wants to spread instability in India through Bhaskaran. For this, Major Sameer along with his henchman Sajid conspires and gets Subbu killed. Bhaskaran feels that the Indian Prime Minister is responsible for this.


Bhaskaran resigns as the Prime Minister of the Government in Excellence and makes Deepan PM and himself along with his confidants and the ISI plots the assassination of the Indian and Sri Lankan PMs, who are about to meet in Chennai for a settlement. The key piece of this conspiracy is Raji, a trained and dangerous soldier.


Can Srikant Dismiss all the conspiracies and plans?

Meanwhile, fed up with the daily scolding of his many years younger boss and increasing distance with his wife, Srikanth leaves the job and returns to the task and then joins his team to foil Bhaskaran's plot in Chennai. Can Srikant be able to stop Raji? What is the future of the Government of Exile of Tamil rebels? Can Srikanth thwart ISI's plans once again? Can Srikanth be able to stop his family from going apart? The answers to such questions weave the story of nine episodes of The Family Man 2.

The second season of The Family Man is as tight as the first season, thanks to screenplay writer Suman Kumar. Suman through his screenplay has threaded so many characters and events scene-by-scene with utmost fluidity and simplicity.


Even for a viewer with little understanding of politics, it is not difficult to understand the developments. Attention has been paid to the framing of the scenes, which brings it closer to reality. Manoj Bajpayee has once again done his perfect job in the character of Shrikant Tiwari. Manoj's light-hearted and serious scenes with Sharib Hashmi as JK are the high points of the series.

The Family Man 2 Bilingual for all its Fans

Another thing about the series that impressed me is its language. The Family Man 2 has been kept bilingual. Tamil characters speak in Tamil throughout the series, which is translated into English with subtitles. Even if the Tamil characters are speaking Hindi, their pronunciation is genuine, which keeps the scenes from getting dramatic and ridiculous.


The Family Man 2  has Punch Dialogues

The Hindi dialogues are written by director Suparna S Varma, while the Tamil dialogues are penned by Manoj Kumar Kalaivanan. Suparn has kept the dialogues smooth and close to reality. For example, while talking about sympathizers of Tamil insurgents at one place, Srikanth says – ‘Duniya Bhar me terrorism ki deffination samay-samay par badalti rehti hai. Jiski Sarkar uski policy.’

The supporting star cast of the series has also left no stone unturned. Milind K in Sunny Hinduja in the character, Seema Biswas in the role of Prime Minister, Vipin Sharma in the role of Secretary Sambit has done a great job. Late artist Asif Basra appeared in the role of marriage counselor. The scenes of Manoj Bajpayee, Priya Mani and Asif are witty as well as mature at the ideological level.


At the same time, the performance of Tamil actors is the life of this series. Be it Mime Gopi as Bhaskaran or Anandasamy as Selva or Azagam Perumal as Deepan. Suparn himself has a cameo in the role of a journalist and creator Krishna DK in the role of Priya Mani and Sharad Kelkar's boss.

Samantha Akkineni, is a very good actress of Tamil and Telugu films, and this can be proved in the second season of this series. Samantha's performance in the various layers of the character of Raazi is worth watching. Samantha has successfully engraved the pain and anguish of Raji, who spoke very little to the desolation in her eyes. The characters of Manoj Bajpayee and Samantha come face to face for the first time in the sixth episode of the series. In these scenes, Samantha has lived the audacity and attitude of Raji to the fullest.


Some Negative to the Positive

Now if we talk about the negative aspects of the series, then the biggest weakness of The Family Man 2 is its plot, for which such a chapter of Indian politics has been raised, which is known to every child of this country and for this reason other The story of the season tends to be pretty predictable.

Some of the twists in the series feel worn-out and over-the-top, which could have been avoided. However, the fine texture of the scenes in the screenplay has made up for this shortcoming. Compared to the first season, the second season loses on this front. However, this predictability doesn't deter viewers from binge-watching, and that's the biggest win for The Family Man Season 2.